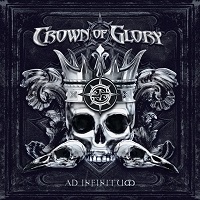 On this, their second album, Swiss crüe Crown Of Glory prove themselves to be one of those bands who can easily, and seemlessly, switch between different, but related, sub-genres, from the symphonic end of the power metal mien through moments of arena-filling lighter-waving AOR anthemics to soaring melodic rock interjections which uplift and energize, showcasing the ability of a band who are more than comfortable to deliver on every level on which they seek to do so…

It has to be said that Crown Of Glory have a name with strongly Biblical overtones – it is heavily referenced, particularly in the epistles of the New Testament, as the object which the “saved” will attain when the ascend to the Kingdom of Heaven – but, thankfully, they do not show any overtly forceful signs of being a “Christian” band; although there are some spiritual elements to the lyrics, these are more of a commentary on modern society and how the individual both adapts and challenges the circumstances around them. And, in fact, if anything, ‘Ad Infinitum’ is an album which, rather than dwelling on a possible after-life deals with the here and now, and particularly the band’s sheer enjoyment of playing heavy metal and their close relationship with their fans (or their “crew of glory” as they refer to them in the liner notes), as evinced on tracks such as ‘Let’s Have A Blast’ and ‘Glorious Nights’…

Heaving into sight in traditional symphonic metal style with an intro that sounds like a soundtrack outtake from JJ Abrams’ re-imagining of the Star Trek franchise, opener ‘Emergency’ almost immediately reveals COG’s ace in the hole – and that is Hene Muther’s supremely powerful vocal delivery. Power metal, AOR and melodic rock are all subgenres that, no matter what is really is going on in the background, rely on a strong vocal performance from the man or woman at the front, and Muther certainly ranks among the best in the business, with a magnificent range and a pinpoint accurate level of delivery that exemplifies everything that is great about the particular miens which COG extrapolate to such great effect.

That is not to say that the musical performances are any slouches in comparison: far from it, as each of the musicians delivers on each and every level, and consummately so. The twin guitars of Markus Muther and Hungi Berglas interweave both with each other and the perfectly positioned keys of Oliver Schmacher, which demonstrate the bands consummate ability of the band to blend atmosphere, harmony, melody and power, the latter of which is underpinned to precise effect by the rhythm section of Jonas Lüscher and Lukas Soland.

There are some truly exquisite moments on this album, from the frenetic thrash of opener ‘Emergency’ to one of the album’s true standout moments – the stunning duet of ‘Something’, on which Muther is joined by Seriana Telli, best known for her stint in fellow Swiss powerhouse Burning Witches as well her own Dead Venus project, and which ranks with the best examples in the genre. OK, there are elements of cheesiness, especially in the lyrical department, but then it wouldn’t be a power metal album if there wasn’t a liberal slice of cheddar applied here and there. And that is part of the charm of the genre, of which this album is a stunning example and an essential addition to the shelves of any self-respecting lover of hard-hitting, brilliantly executed melodic metal.