Blutfeld – ‘Kingdom of Mine’ (Heathen Tribes) 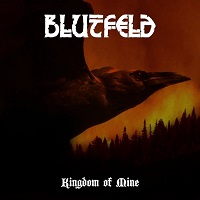 Hailing from Sweden, death metal outfit Blutfeld began in 2015 as the brainchild of Daniel T and Lord Flabriel. The former handles the vocals and keyboard work while the latter takes charge of guitar and bass. After spending time fleshing out their vision for a combined sound, the pair set about writing and recruiting additional musicians for the purpose of recording. The result is debut EP ‘Kingdom of Mine’, six tracks of epic death metal and looking to make a statement. Will the EP provide a short, sharp punch to showcase what Blutfeld are capable of?

Opening with the appropriately titled ‘Fanfare’, the listener is introduced to a grand sweeping soundscape. Layers of trumpet samples build upon a steady drumbeat. As the brief track progresses, Flabriel’s guitar work comes to the fore. Layers of lead work are added into the mix, thickening out the texture without overloading the sound. It’s an introduction which highlights the individual talents of the main musicians in terms of creativity and musicianship. ‘Natural Born Leader’ kicks off the metal vibe proper. Heavily distorted chords and tremolo picked lead lines form the main introduction before the frantic paced drumming joins in.  Additional musician Jonas Hoffman is responsible for the percussion and links in well with both Daniel T and Flabriel. The relentless power of the music is highlighted by both the crushing guitars and pounding drums. Throughout the punishing heavy sound there is a strong melodic undercurrent that lifts the vibe to a more epic level.  The mix of the track adds a doom like element overlaying the main soundscape. However, there’s no muddying of the mix and each instrument is identifiable in its own right. With additional vocals from Samantha Kempster, the vocal lines are not only thickened in texture, but the harmonies accentuate the darker atmosphere.

‘New Dawn’ continues with the epic death metal vibe. Mixing in elements of the previous track and also the introductory ‘Fanfare’. The staccato nature of the music for the majority of the track offers more sonic interest for the listener as the stop start cadences draw the listener into the soundscape being created. The instrumentation combined with the trumpet samples offers a thick texture that further highlights the epic side of Blutfeld’s sound. As the track progresses the staccato style morphs into a more free flowing guitar driven metal track. Chugging basslines mix with a driving riff while the pounding drums drive the tempo to the outro and final cadence. ‘Ritual’ opens up the latter part of the EP with a sense of foreboding created by its layered samples. The track moves between phrases and passages without developing into a full metal vibe. It serves to develop a darkened theme drawing the listener into the atmosphere of the music.

‘Victory or Defeat’ lifts the mood from the dark atmosphere of ‘Ritual’. A track with a Viking metal edge to it. ‘Victory or Defeat’ features some of the cleaner vocal and guitar melody lines found on the EP. The bass and drums lock together to drive the song forward while the guitar work provides not only catchy lead hooks but memorable riffs too. After a brief break of sound effects featuring sword fighting and charging horses a highly charged guitar solo kicks in. This solo takes the track towards its final phase, mixing in elements of traditional metal with their death metal style for the outro. With the use of a different elements and a slight blending of metal styles, ‘Victory or Defeat’ makes for a standout moment on the EP.

The title track sees the record to a close. Once again, the band mix in a more straightforward, traditional metal, approach to the musical delivery. The track builds in both energy and dynamics rather than being an all-out ferocious attack. With additional vocals from Hada Pixie adding spoken word elements at both the introduction and breakdown section, there’s extra sonic interest created as it boosts the guttural delivery of Daniel T. Once more the guitar work of Flabriel stands out clearly as his lead lines take charge of the melody hooks and his powerful riffs combine with the drums. With a final nod to ‘Fanfare’ the track and EP come to a well rounded close.

Over the course of six tracks, Blutfeld have delivered a solid introduction to their brand of death metal. With the use of samples and pads as well as the well structured and crafted music, there is an undeniable epic edge to their sound. As there is only two main people within the band, the use of additional musicians was inevitable. However, it does not detract from the fact that this is a unified vision and they’ve clearly found a drummer who shares their vision as well as additional vocalists that work well with what has been created. It’s an EP that flows together with each of the six tracks pulling elements from the previous track and mixing into a unified sound. This creates a concept feel to the music, however, individual tracks like ‘New Dawn’, ‘Victory or Defeat’ and the title track stand up well on their own. Where some may draw criticism is with the atmospheric tracks such as the opener and ‘Ritual’. Some may be put off by the perceived lack of progression with the latter track and that it may stagnate. With that being said, it is a piece of a larger picture, forming a soundscape that leads into the latter part of the EP and serving to create an encompassing mood when the record is listened to as a whole rather than in part. ‘Kingdom of Mine’ represents a great starting block for Blutfeld and it will be interesting to see where the creative partnership of Daniel T and Lord Flabriel goes to next.