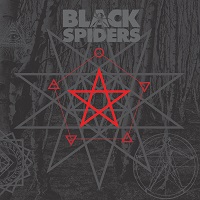 It’s somewhat typical of the modern music market. You find a band, completely by chance, whose music you really enjoy. They release a couple of albums, they look like they’ll be making it big. A couple of EPs filter out, you’re hyped for the next big release, and then… hiatus/split time. I thought we may have unfortunately seen the last of Black Spiders but that thankfully seems not to be the case after time out in lockdown has readjusted priorities. Will they live up to the hype they rightfully built up?

Yes, they have indeed. I admit that on my first listen of the new release, I was a touch underwhelmed; but it started growing on me fairly quickly, something I put more down to lockdown fatigue in fairness, rather than the quality of the songs as the same ones I was initially unsure on are ones I was singing along to a couple of listens later. This could be something to bear in mind should it maybe not immediately click for yourself in the same manner, given there is genuine quality contained within this release.

We’ve had two singles to date from it and they both lean heavily towards the fun-fuelled old school rock n roll that the band were admired for prior to their – thankfully temporary – split in 2016. ‘Fly In The Soup’ conveys an almost punk spirit in that wish to antagonise and not just follow the masses, while ‘Good Times’ is just how it sounds, all about the partying and excesses that have so long been associated with the rock and roll debauchery so many of us wish we could live constantly in. Between them, they do a good job of showcasing a lot of what is contained amongst their ranks, while there are a couple of extra bits to spice things up rather nicely.

My own personal standouts on this are ‘Wizard Shall Not Kill Wizard’, an absolute heavy blues style stoner effort that rips through the riffs, assaulting your eardrums in the best possible way, and ‘Back In The Convent’, one of the more adrenaline-fuelled tracks that keeps the heat turned right the way up throughout the song, pummelling your senses on the paths trodden so many times over by Lemmy and co in the past. The album as a whole is strong and it’s a testament to their enduring songwriting that they could release an album this strong, a good EP of tracks that didn’t quite fit the mood of the album and still have more ideas left over that can already half fill a potential next album, as Pete tells me in our chat!

In short, it’s another great release from the Sheffield rockers, who showcase their various talents with another rip-roaring riff-fest, adding in a dash of punk spirit, an unhealthy but very welcomed dose of heavy blues. They had rightfully forged quite a reputation for themselves with their earlier efforts and they’re now back to reclaim their place among the cream of the NWoCR that seem to be emerging around the globe. A tour de force that the likes of frequent tour mates Airbourne would be proud to put their name to.

You’ve read what I think of the album, but let’s get the story straight from the horse’s mouth, as it were, as I got the chance to chat with frontman Pete Spiby for a great chat (and even longer after the recording stopped!), which you can catch below. Here are a few snippets to whet your appetite…

And, as a bonus, we get shown Pete’s first idea for what became the artwork for the recent ‘Deaf Proof’ EP!