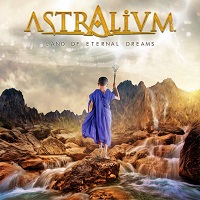 This album is extremely visual. Put on a nice pair of headphones and close your eyes and you can see a whole new fantasy world. In ‘Seven Seas, Seven Winds’ you can see the open seas and feel the rough wood of the railing around the bow. If you were to watch the ‘Lord Of The Rings’ movies and then listen to the soundtrack, you would see scenes of the movie in your mind; but if you have never seen it you would have not had the context to know. ‘Land Of Eternal Dreams’ brings to mind images every bit as vivid as that and tells stories just as well without there having been a movie first.

There is a lot of similarity to Kamelot both in the construction of many of the songs as well as in the male backup vocals. The lead vocals bring to mind all the best elements of all three Nightwish singers and Roberta is able to move between all three styles effortlessly while still maintaining her own unique style the whole time. The way they use the male and female vocals to complement each other is also perfectly done. They combine many different styles. It is all here woven into every song that I can’t say what her vocal style actually is because she shows so many. I can say the same about the backup vocals as well. The range shown here is more than I have ever seen before.

The instrumentation is wonderfully complex as well with huge powerful moments where an orchestra is brought in but then there are breakdowns with just a piano and a couple supporting instruments. There is so much subtlety in every song that with every listen you hear something you had not before. The way they balanced the stereo effect also makes everything sound fantastically here- dimensional. It is as if the world is moving around you or more accurately within you.

If you like symphonic metal at all and do not pick up a copy of this album your collection will be missing something vital. I think this might be the best album I have heard this year, and it brought me to tears multiple times. It will be the new standard for me as to what is a perfect symphonic metal album, at least for the time being. I do not think anyone will be disappointed in what they hear here, and I think this is probably a fantastic album to convert new people to the genre – but at the same time lacks nothing that long-time fans will look for.

‘Land Of Eternal Dreams’ will be a classic we all look back on for years.