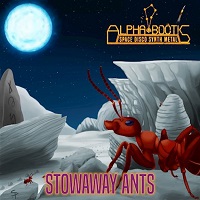 I’m pretty sure there’s now an automatic filter at ÜRHQ that takes any album submissions that are vaguely outlandish and assigns them to me… but you know what? I’m totally here for it. It means I get to check out bands that might otherwise be completely overlooked, and today’s submission from Canadian act Alpha Boötis is a perfect example of that.

Sporting two original tracks of “space disco synth metal” ‘Stowaway Ants’ is quite the musical adventure. It whisks you forward in time to the year 2584 where a tiny group of ants have managed to sneak onto an interstellar colony ship ready to depart from earth in search of new inhabitable worlds. Will this group and their queen beat humans to be the first species on another planet? You can find out in the title track…

‘Stowaway Ants’ is a bit of an eclectic mix of styles really, as you probably already guessed. At its core it has all the makings of a cheesy power metal song, a bit similar to something that Gloryhammer might come up with, but there’s so much more going on. This is blended with a significant amount of synthwave/chiptune to reinforce those futuristic vibes of these intrepid ants but just to top things off there appears to liberal use of… saxophone? I really appreciate how Alpha Boötis stick to their theme of telling the tale from the ants’ viewpoint in this track, with choice lyrics such as “we may be small, but we still pull our might” and “following a trail of crumbs to a feast made for queens”. It’s made all that more appealing to me as it reminds me of one of my favourite books, Truckers, written from the viewpoint of gnomes living in our world (Terry Pratchett, well worth a read!).

This is followed by the entirely instrumental number ‘Plasmic Wastes of Alkalurops’ which has a brilliant synth-driven disco feel to it. It’s a pretty infectious song that put me into a really upbeat mood and threatened to even get me dancing around the room (which would be about as graceful as Bambi on ice). It continues that futuristic vibe and even includes some liberal use of the bell without attempting to be a Christmas song which is a massive plus for me!

Then the album closes with a cover of The Police’s ‘Every Breath You Take’ which is everyone’s favourite song about a stalker! This feels a little out of place with the rest of the EP but it’s still a pretty respectable cover. There’s nothing too outlandish about it though and it sticks fairly true to the original (and I’m sure you know what that sounds like).

So overall, I really enjoyed this! It feels very tongue in cheek, but there’s clearly been a lot of thought that has gone into it. Considering it was inspired by an ant that hitched a ride in composer Ozzymandias’ car as he road-tripped through the ÜS, it really has developed into something worthy of a listen. For me, ‘Stowaway Ants’ will join my collection of “music I must show my mates after we’ve had a few beers” which is a very worthy collection indeed!