ALBUM NEWS: KREATOR TO GO ‘UNDER THE GUILLOTINE’ 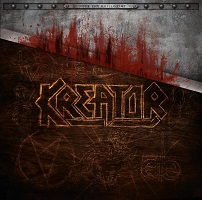 Teutonic thrash legends Kreator are to celebrate their decade-long association with the iconic Noise Records imprint via a massive deluxe boxset being released early next year.

‘Under The Guillotine’, which will impact globally on 26 February, will contain re-issues of the band’s first six studio albums, plus a wealth of bonus material:

In addition, the first 250 orders from the Noise Records store will also receive a signed art card by Kreator’s Mille Petrozza.

Also available as an introduction piece is ‘Under The Guillotine – The Noise Anthology’’ an 18-track double-vinyl collection of Kreator’s Noise-era classics, pressed on splatter vinyl, including rare and unseen photos. For non-vinyl collectors, there will also be a 30-track 2CD version, housed in a mediabook. Both feature rare tracks and remixes from the band’s discography.