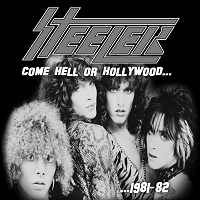 Long defunct US rock legends Steeler are to mark their 40th anniversary with the release of a collection of long-lost early recordings.

‘Come Hell Or Hollywood’ will feature remastered recordings from 1981 and 1982 – the period prior to the then teenage Yngwie Malmsteen joining the band. Among the tracks will be a “lost” version of the Steeler anthem ‘Cold Day In Hell’, as well as unheard versions of the Rolling Stones’ ‘Let’s Spend The Night Together’ (the only cover song Steeler ever played) and fan favourite ‘Backseat Driver’.

While the release is the brainchild of original Steeler guitarist Michael Dunigan, who was succeeded by Malmsteen in 1983, vocalist Ron Keel and specialist label FnA Records have worked closely together on this project to present the recordings in their proper context.

Ron Keel told us: “It’s like walking the streets of a heavy metal ghost town. There’s historical value here, and this magical moment in time needs to be properly preserved and shared. There are those that lived the Hollywood heyday with us, and those this missed it – this album is dedicated to all of them.

“Many of these tracks are medium rare, and others are absolutely raw – but thanks to FnA, the project is well done. We were helping give birth to a cultural revolution, and childbirth is ugly, messy and painful; it’s also one of the most beautiful things you’ll ever experience. I was just learning how to sing and write songs in 1981-82.”

In addition to the CD, there will be a limited-edition 7″ vinyl single, in both black and blue vinyl pressings, of ‘American Metal’, the first song ever recorded by Steeler, in Nashville in 1981. The CD and vinyl single are also being offered with various merchandise bundles, that include collector’s guitar picks, bumper stickers, Steeler patches and autographed photos. The CD packaging features a 28-page scrapbook-style booklet packed with rare photos, flyers, personal liner notes written by Keel and Dunigan, magazine clippings and other memories.

“This is a huge victory for FnA Records to bring this project to the fans,” acknowledged FnA’s Steve Lockett.

“We’ve been working hard on this release for two years now, and I’ve enjoyed working with Michael and Ron to create a very special time capsule of their early 80’s music and experiences.”

‘Come Hell Or Hollywood’ will be released on 21 July.