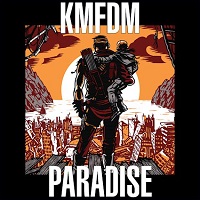 Twenty-one albums into a 35-year career, its safe to say you more or less know exactly what you’re getting when industrial legends KMFDM come around with a new record. In a classic example of ‘if it ain’t broke, don’t fix it’ KMFDM continue to do exactly what they always have on ‘Paradise’, building a techno-tinged industrial metal record with heavy themes of disenfranchisement. In many ways, it’s kinda funny that the dystopian sentiments you’d find on ‘Paradise’ actually feel like a lighter alternative to the ceaseless tide of bullshit we actually have to contend with each day, statements of “they plan to destroy you, they’re coming for you” on opener ‘K-M-F’ feeling trite when compared to the hateful bile you can find just by flicking on the news.

But then, maybe that’s the point? When the world has grown to exhibit so much of the darkness artists like KMFDM and Ministry tried to skewer, you have to start wondering if these artists still have the potency to make an impact in such worlds. Of course, it doesn’t help that ‘Paradise’ doesn’t seem to have a unifying enemy or message it wants to actually protest against. When you have Trumps, Farages and Borises aplenty, it feels like you can throw a dart in the dark and still hit a target with 98 per cent accuracy, which makes it kind of crazy that we don’t have a particular straw man to burn on this record. Maybe that’s the point – the abstracts remain while the figures change – but it feels more likely that this is intended as dystopian entertainment more than some kind of unifying statement.

So, let’s look at the entertainment then. Industrial metal is gearing up as a vogue style again after nu metal all-but made industrial a dirty word, the likes of Motionless in White and 3Teeth aping the styles of the past with unwavering dedication that’d make you think it’s the 1980s all over again. Its that kind of mindset KMFDM thrive in; ‘Paradise’ is prime 80s-style industrial, its dancehall beats and snarled vocals harkening back to a time before industrial had evolved beyond the clubs and gone for stadiums. KMFDM offer up a smorgasbord of techno-metal crossover styles for ‘Paradise’, offering up shades of everything from dance to hip-hop in their quest to evoke the relics of a by-gone age. There are points where it works exceptionally well – the record’s title track and ‘WDYWB’ are anthemic enough that they warrant inclusion in the band’s increasingly crammed setlists, oozing greasy charm in a way that few bands can capture as convincingly.

Forefathers to the likes of Rammstein and even synthwave pioneers GosT, Perturbator or Carpenter Brut, KMFDM still possess a charm that ekes them out as coming from a different class to what has followed. ‘Paradise’ captures this perfectly by forging ahead on the path the band has always trod. Decidedly lighter on the band’s more metallic elements this time out, Paradise feels like a return to the roots of where it all began for KMFDM, evoking the scenes that existed in the ’80s and replicating them wholesale in their own way. Closer ‘No God’ embodies this perfectly; dancehall dub with electronic elements, the song’s core beat feels like it wouldn’t be a million miles from a northern club at the height of Thatcher’s Britain, or Berlin Wall-era Germany for that matter. While everybody else tries to recapture the supposed magic of the 80s, KMFDM show just how it sounded to actually be there.