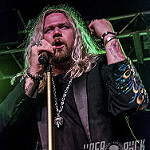 Inglorious frontman Nathan James has stirred up a social media whirlwind with a video in which he gets ripped into former bandmate Wil ‘Billy’ Taylor.

Taylor’s new band, DeeVer, are due to self-release their debut album, ‘You Need This’, on 1 February. In the accompanying PR material, the guitarist, quite properly, points out that he is a former member of Inglorious, and co-wrote both of the band’s first two albums.

However, in a video filmed in a hotel bedroom and broadcast live on Facebook, James, who currently is on tour with Jeff Wayne’s ‘War Of The Worlds’, lambasts his ex-friend, accusing him of “using my name to get press” and claiming that “the only reason anyone knows who these people are is because of their affiliation with me… and that’s sad”. He goes on to slag off Taylor’s singing, saying that he doesn’t “have the same range as me”, describing his former guitarist as “delusional”.

More importantly, James goes on to describe Inglorious as “MY fucking band, mine, no one else’s”. He then refers to Taylor as “a piece of shit”, before boasting about being about to “go on stage in front of 10,000 people at the Genting Arena” (without mentioning that he is appearing in ‘War Of The Worlds’, not fronting “my fucking band”). Ironically, an announcement about Inglorious’ new bassist and guitarist, which was scheduled for Thursday night, the same time as James posted his rant, so far has not been forthcoming.

DeeVer have said they will not be responding to James’ comments. Frontiers Records, Inglorious’ label, have been approached for comment but so far have not replied.

It’s very rarely that Über Rock runs a story like this. However, when an egotistical narcissist goes off on one, filming such a hate-filled tirade and makes a complete twunt of himself, then he deserves all he gets. After all, we are the website that doesn’t kiss ass but kicks it…