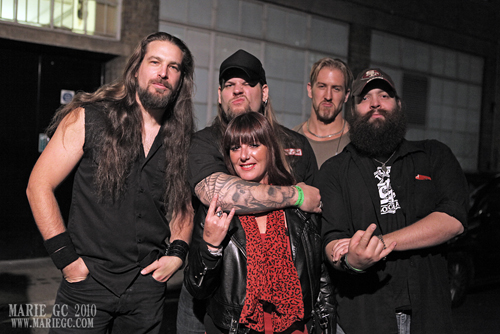 My first meeting with Godsized goes way back to a gig at The Gaff when a promoter asked me to run his night for him as he was off on tour with another band. Dragging myself off to work but in a non-work way – i.e. Not interviewing bands but mopping their brows, dealing with their egos and fetching them bottles of water. There are a few bands who, happily, I’ve forgotten the names of but headlining were these, literally Godsized monsters. It’s the first time I’ve ever felt so damn safe in a venue before. A couple of years down the road now, they’re going as strong as ever and it’s their EP launch and I’ve been invited along!

I feel it important to set the scene of what ensues in this interview. Don’t think of Effon (drums) as the ‘Lexxi Foxxx of Steel Panther’ because we took the piss out of him (although there were a lot of similarities between them!!!)  but he and I had a run in at High Voltage Festival where he could not remember who I was and despite Gavin’s best efforts to jog his memory, the light slowly brightened just before the eye blinding red embarrassment on his face was more than apparent. Neither I nor the rest of Godsized seem to want to let this go neither during the last few random run-ins at Download or tonight … After much banter in amongst a few dumpsters at the back of the legendary 100 Club in London, the interview finally gets under way…

What, for you, are the fundamental differences between 2008’s ‘Brothers In Arms’ EP 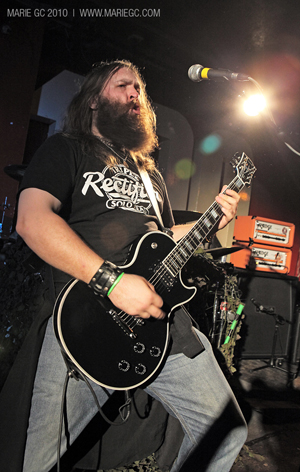 and your latest offering, ‘The Phoney Tough and The Crazy Brave’?

(All laughing)  That was from the blonde one in Godsized!

Glen:  The fact that Gavin played the bass on this one for a start.

Gav:  It’s been great;  there is an audible difference I think.

Glen:  It’s a big difference in that the songs are a million miles away from what we were doing before.  With the production we went for a more natural and more representative sound of who we actually are.  I think we were all very happy with ‘Brothers In Arms’ but the producer said the guitar tones weren’t quite what we do live.

Why was the decision made to release a second EP as opposed to a full album?

Glen:  To record an album and do it justice you need to have the backing of a label to really push it and to really get it where it needs to be otherwise you’re offering up all your best songs on an album and if it doesn’t go anywhere, you’ve wasted them to only start all over again.  The idea is to do another EP to keep the momentum up.

Gav:  It’s a stepping stone to the album.

Glen:  People also get an idea of where the band is progressing too.  Hopefully we will get label interest and then we can do the album. 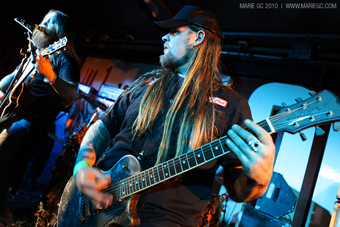 Speaking of labels, in an industry where mediocre and non-threatening music is perfect to market, do you think labels will become obsolete anytime soon?

Neil:  I think it’s a double edged sword really.  As a band that has self funded itself, we obviously know how hard it is and the struggle it is to keep yourself going and on the road, recording and everything else that that entails.  In a way this is good because everything you make, 100% of it goes back to yourselves, you don’t get that with a label.

Right, so what you’re after really is a big credit card?

(Laughing)  Yeah.  The good thing about a label is that you have the clout of a certain name and you’ve got not just budget but also their knowledge.  The industry is just a bit snooty and it just looks good if you’ve got management from ‘this’ company or an agent from ‘that’ company or ‘this’ label.

Going back to your new EP, which we get to hear live shortly, word on the street is that one of the tracks opens with a belter of a bass line.  ‘Head Heavy’ off ‘Brothers..’ was similar with a groovy bass line.  What is Godsized’s particular writing style?

Glen:  A belter of a bass line? 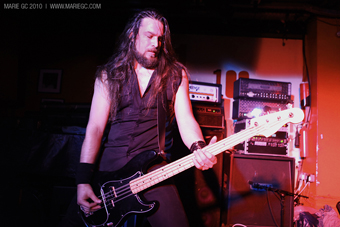 I read a review online about the ‘The Phoney Tough & The Crazy Brave’ and they mentioned it!

Glen:  The review means shit because it opens with a drum solo.

Neil:  The song, ‘The Phoney Tough & The Crazy Brave’ opens, so the whole EP opens with a drum break.  I don’t know if there is a right style.  Glen does a lot of writing on his own – he kind of has a vision of it…

Neil:  I think you’re always going to get that with someone who plays guitar and sings.  Naturally he’s a songwriter, there is no doubt about it.  The other way we write is just jamming riffs in a rehearsal room.

Effon:  I want to point out for the record that the drum intro was not my idea. 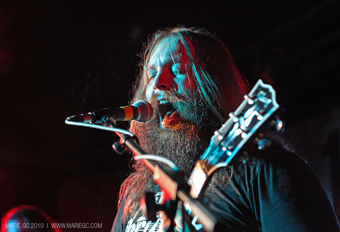 Glen:  It was actually my idea (laughing).

Are you not happy with it?

Glen:  He hates drummers, drumming or talking to drummers (laughing).  As a drummer, he would rather talk about Gibson Les Pauls.

(Laughing) That concretes my theory that you need to be 6’3 to be in Godsized and Effon meets that requirement only!

(Everyone Laughs)  Always going the extra foot aren’t you? Back to your writing style!

Glen:  If we take an example of me writing on my own, I don’t think to myself that I’m going to sit down and write a specific thing – it’s whatever comes out at the time.  It’s the same when I say to Neil or Gav, “What riffs have you got”, they’ll play what they have and we just go from there.  It’s never anything specific.  In my years of writing music, if you try and think of 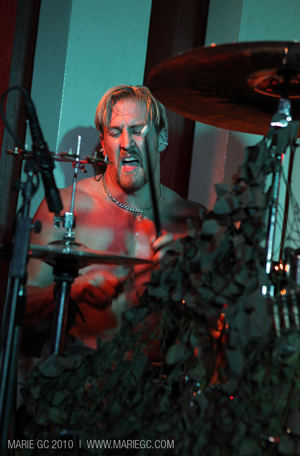 something specific, it’s never going to happen.  If you try and force it, you’re going to fall flat on your ass.  If you let it come naturally and you let it progress, that is the way you write your best stuff.

Neil:  Both approaches work very well for us.  Whether we have one person focussing on a song or we have four heads just jamming – I absolutely love that.

Glen:  I must admit I love that aspect of writing too.  The song, ‘The Phoney Tough & The Crazy Brave’ started off with Neil having two riffs and in four hours we had come up with the whole song.

(Looking at Effon)  And you had a hi-hat?

[Effon at this point keeps very quiet so I’m starting to feel a little bad about all the abuse that not just I, but the backing of Godsized in my teasing is giving me so I decide to focus a bit of drumming attention on him]

How important is a gong in a drummer’s arsenal?

(The whole band erupts and it’s just about audible on the recording to hear Neil saying, “ahhhh the gong!”)

Effon:  If I could, I wouldn’t even have cymbals, I would have seven gongs.

(Godsized are still erupting.  I laugh and say that it was not even a question that I was going to ask them)

Effon:  There is a gong in the first track and when we got to the mixing stages of the album, the only comment I had was that the gong needed to be fuck loads louder. 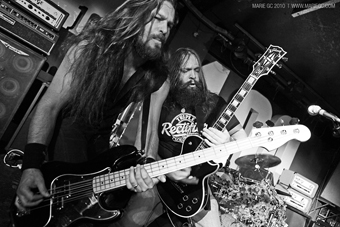 Glen:  And it wasn’t in the right place.

Effon:  I said keep it in that place and add another one – two gongs (everyone is laughing).

You’ve played Hammerfest and Download – what’s next on your agenda?

Glen:  Mammothfest tomorrow (a discussion takes place as to whether they fit in on the bill or not).  Getting the EP out and then focussing on the album.

Musically, if you had to put ‘The Phoney Tough & The Crazy Brave’ into my CD rack, which bands would be propping it up from either side?

Effon:  I would have it alphabetically ordered. 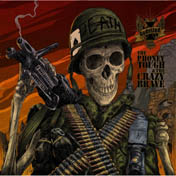 Gav:   (Laughing) Thinking on his feet!

Neil:  Someone once said we sound like Pantera, obviously because of the Godsize reference and then someone said that we sound as heavy as Soundgarden and I thought, “I’ll have that”.

Finally, if you had to give me a one line sentence that sums up Godsized, what would it be?

Neil:  Heavy as Soundgarden (everyone laughs).

That’s someone else’s quote – get your own.  Come on Effon!

Effon:  I’m going to regret it as soon as I’ve said it.

(All laughing)  How about, “I’m Godsized, who are you?” (Everyone laughs).

(Everyone laughing)  Glen:  That’s one word.

(After much deliberating and a hell of a lot of piss take between each other, collectively they decide on…)

Effon:  Got to be over 6 foot, weight more than 200 pounds and be able to play reasonably well.

Thank you very much guys.

Photo kudos goes to the rather wonderful Marie GC