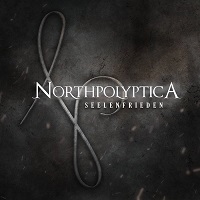 Sometimes a band will reach out to ÜRHQ directly to present us with their album for review, and someone who puts in that much effort for us to listen to their album deserves the attention right? That’s what I thought when the German synth-rock trio Northpolyptica got in touch with their very first physical release, ‘Seelenfrieden’, so I decided to dive in and see what was in store.

Northpolytpica took their first steps into the music industry with digital album ‘Herz, Lass Nach’ which was picked up as the soundtrack for the horror game ‘The Nightfall’. Cue a significant amount of positive feedback from Youtubers and their followers, and it was clear that this trio had tapped into something special. The only logical decision was to hit the studio to record a new full-length album, and this is where ‘Seelenfrieden’ was born.

Consisting of eight new tracks, and all six tracks from ‘Herz, Lass Nach’ which have been updated for this album, ‘Seelenfrieden’ is quite the experience. The trio blend gothic and symphonic elements to create music that sounds something like a cross between Depeche Mode and Nightwish where the focus is the vocal pairing of Cynthia Enn and John Lötzsch. Now these vocals are pretty impressive as it sounds like both may be classically trained to the point where it sounds almost like an operatic performance – think ‘Phantom of the Opera’ and you wouldn’t be a million miles away. Although, the lyrics are all in German, so it’s more ‘Das Phantom der Oper’, I guess.

While the vocals may be the focus though, you can’t ignore the man who makes up the rest of the band – Markus Lippoldt. He is simply credited for “Instruments” which I can only assume that every synth line, drum rhythm and guitar solo is all down to this man. Hell, I can’t even play one instrument well, and here’s this guy performing an entire bands’ worth of instruments. You can’t deny that it’s a little impressive. He brings those gothic synth sounds that hark back to the likes of Depeche Mode and Sisters of Mercy that gives this a pretty unique feel. I’ve found a lot of synth driven bands tend to opt for more of a synthwave sound at the moment, so this dark and gothic sound is a real pleasant change from that!

This was a big surprise for me as I came into this expecting something completely different to what I got. I’m not sure exactly what I was expecting, but I know I didn’t expect to have my mind blown in such a manner! This is an album I can see myself coming back to time and time again, particularly if I’m settling in for a pretty chilled out evening, or I’m trying to focus on some pretty intense work. It’s not what I would call a party album, and that’s okay because I’m pretty sure it’s only Eddie Murphy’s girl who parties all the time anyway. Sometimes it’s good to have something a little more mellow, and ‘Seelenfrieden’ fills that role perfectly. That being said though, were I to DJ at a “Goth Night”, I reckon I would get away with slipping a track or two from this into the mix and it would go down an absolute storm.

All in all, I strongly recommend you check this out. Particularly if you’re an ‘80s goth at heart and maybe ‘The Lost Boys’ is one of your favourite movies. Hell, even if you just fancy something that is a little different from your usual tastes then this should be top of your “to try” list. Now if you don’t mind me, I’m going to go and chill out and give this album yet another listen!